After uploaded to a folder within a MinIO bucket “samples/NYC-taxi-trip”, the dataset looked like this:

I have a single node Dremio installed on a guest VM with the following specs:

Also, I have standalone MinIO server installed on another guest VM with the following specs:

Both installations are default, except for Dremio where I changed this:

Following are 2 screenshots, one during promotion of the taxi dataset folder, and another after promotion: 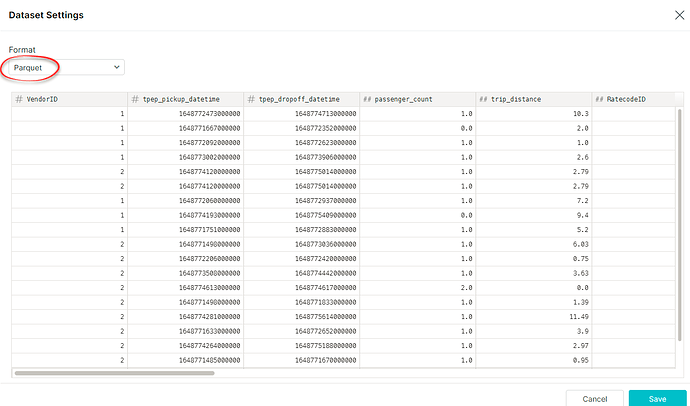 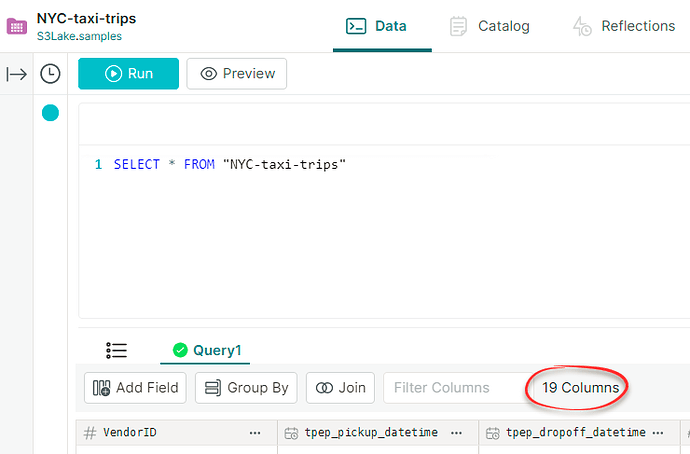 And here’s the job details for running the above query: 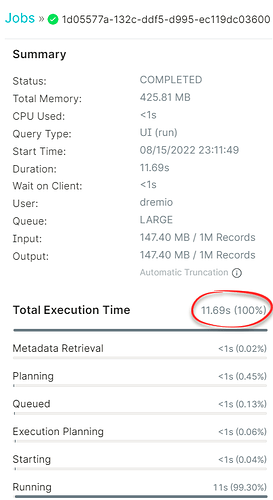 When I submitted the default raw reflection creation job, Dremio machine was like continuously crunching it for over an hour and a half with CPU utilization of 70% - 100% all time: 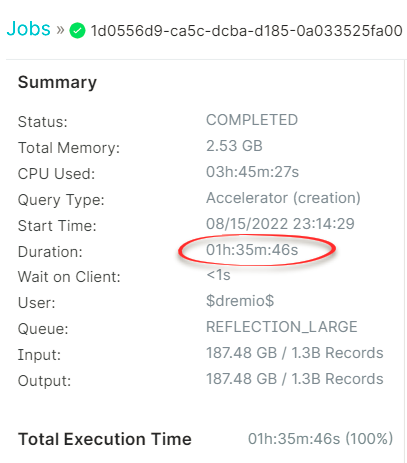 And here’s the created reflection: 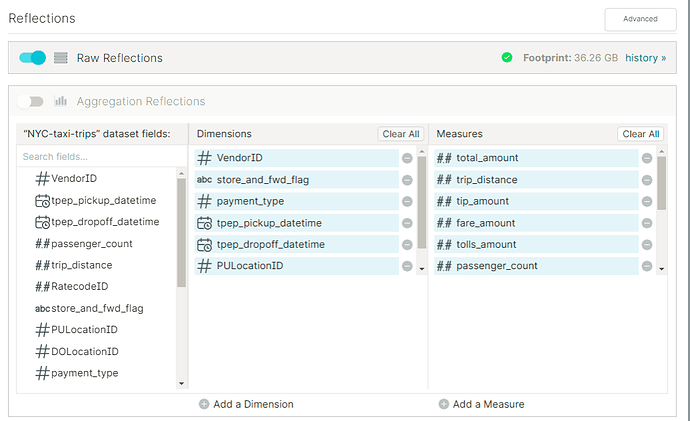 I understand that the performance is improved (though not to the extent I wished, but let me play with this later): 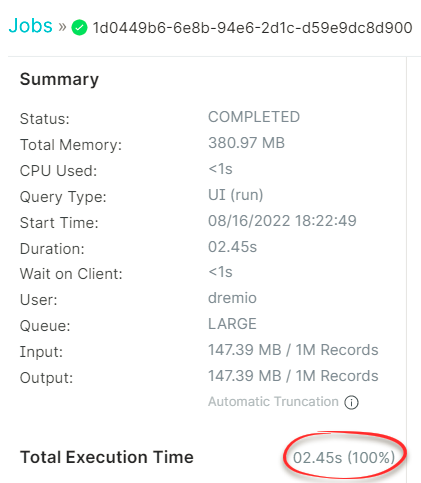 The shock came when I checked the footprint for this reflection, where it was spread in 2 places: one in Dremio machine itself: 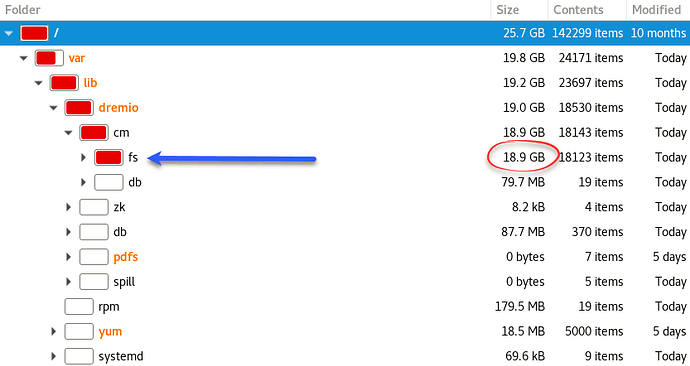 And other in the MinIO machine (dremio22 is the Dremio bucket defined in dremio.config dist variable): 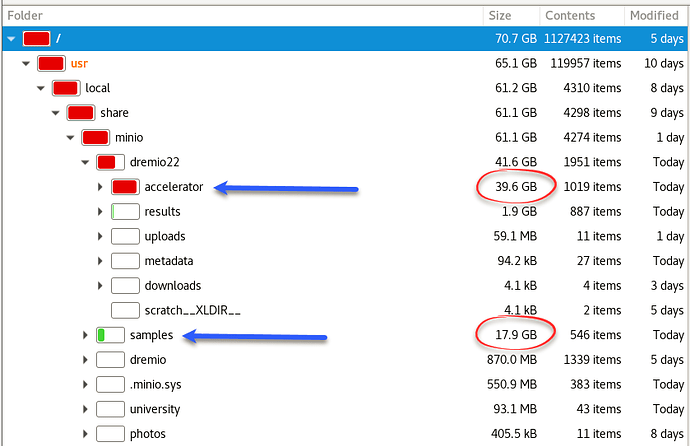 I have few questions here:

Thanks Balaji, I think the picture is clear now. 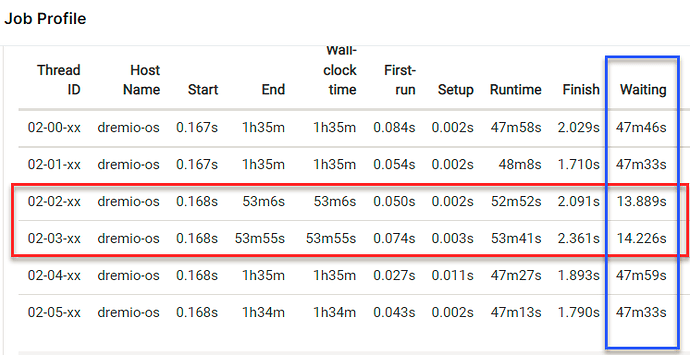 I have 8 virtual cores on my machine backed by 4 physical ones.

Threads #2 & #3 above are almost processing without wait time - completely utilizing 2 physical cores, while the other 4 threads are contending on the remaining 2 cores with almost equal wait-to-process time. And because this is CPU-intensive, I’m not benefiting from virtualization.

If you agree with me, this also tells me that MinIO was not a bottleneck at any point of time and having MinIO deployed in a distributed mode would not have helped. Even running Dremio in a clustered deployment (using same specs) wouldn’t have affected the result as well (please confirm this understanding).

There will be multiple materializations on disk, if you go to your minIO accelerator folder and look under b28ddf70-2652-4f47-a770-b85dcf4a9d3c, how many sub folders do you see with a 16 digit UUID? under each of them you will see Parquet files

Here’s the answer (there are 150 parquet files in there) 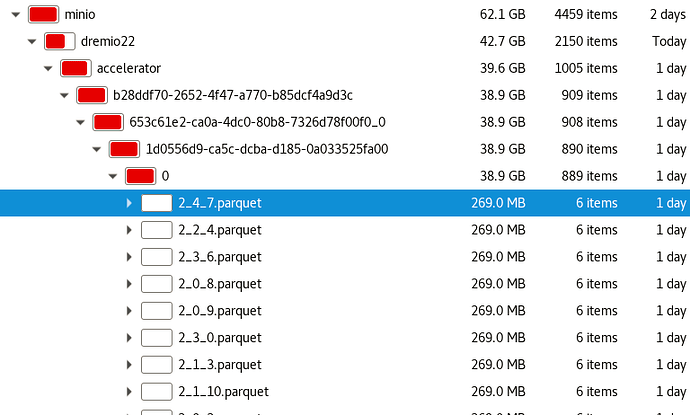 If your original data is also PARQUET on minIO and your reflection is also a select all rows all columns from that dataset and again storing in minIO, there is no big advantage, instead consider creating an agg reflection assuming your dashboards will be reports that have dimensions and measures

Yes, I think the performance increase I’ve seen is because of internal caching. Parquet is a very optimized format and not much can be done to squeeze it further (tried to gzip all of the 16.7 GB parquet files and couldn’t get more than few additional MB of space).

even if you are creating a raw, does dash board need all the columns and all the rows, single node compute is another bottleneck

No, the dashboard would not need every row and column but as an anchor reflection we do need to include everything

@yalmasri Sorry about the silence, do you still have performance issues?

No, I’m content that my machine was doing what it should to create that gigantic reflection. Thanks for caring…